You are here: What to know1 / Heroes Monument

A Monument was built at the CommunityPark in honour of the hero Georgios Koumparis, who got killed while fighting during the Turkish invasion.

It is a marble plaque with an engraved inscription. The Monument was built in 2004 by the Zygi Community Council in cooperation with the hero’s family. In the same year, the unveil ceremony was conducted by the Minister of Defense Mr. Mavronikolas.

Following is a brief biographical of the hero.

Georgios Koumparis was the son of a family that was distinguished during the national fights. His father was Andreas Koumparis from the village of Limnia Ammochostou and his mother was Persefoni Koumpari.

He was the youngest boy of a multi-person family, which consisted of four boys and four girls.

He was born in the village of Arnadi of the Ammochostos District and ever since he was a child, he was distinguished for his patriotism and his Greek-Christian ideals. He studied at the Hotel School of Ammochostos and immediately after that he enlisted in the National Guard and served with the rank of the sergeant at the Higher Administration of Ammochostos.

On the day of the invasion, he took part in the battles of Ammochostos and was killed while fighting by a Turkish sniper’s bullet when he tried to lower the Turkish flag from the Turkish Lyceum.

Finally, it must be noted that the works for the construction and installation of the hero’s bust have begun. 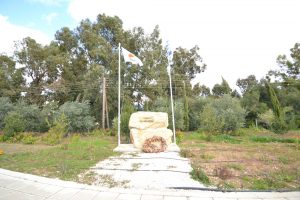